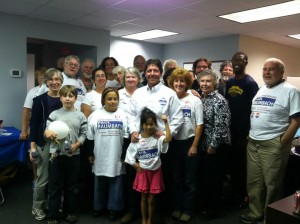 (Newark) Paul Baumbach who won the 23rd District Democratic Primary for State Representative in today’s voting, issued the following statement from his campaign headquarters in Newark:

“I want to first thank my two opponents, Jerry Grant and Claudia Bock for running a very clean and positive campaign. They are to be congratulated for their efforts. I also ask them now to join us in bringing together all our neighbors and friends into a real people’s movement to bring equality and fairness to Dover.

“Finally, I want to thank all of our volunteers and supporters, who gave so freely of their time, energy and resources, to put us over the top in this Primary. There is much more to do and I know I can count on all of them in the general campaign ahead. I know it may sound trite, but there is no doubt at all: we could not have done it without you all – thanks.”